The territory of Sestri, when Sestri did not yet exist, or was not know to, was an archipelago:
Manara, or rather Monte Castello, was the biggest island, impressive and stately; and had Monte Pagano and Bardi united to it in the east, and the island of Sestri — which nobody thought of giving a name to — in the west. Monte Pagano and Bardi were the first to be bridged together, then they stretched and lengthened and spread out until they met and joined the steep coast of Ginestra on one side, and the other wild coast of Manierta and Cantagallo on the opposite side.
Pines grew and thickened, while Manara was becoming the first penisula of Sestri. Trigoso would have been pratically an isthmus, almost as Sestri is now. The waves broke under it, against the rocks which now support/the "Fieschi Conservatory". On its right, on a stoney beach, flowed the mouth of the Petronio. Beyond the promontory of Santa Margherita, there penetrated a sort of indented fjord, yellow with the silt of a stream, the Gromolo, which had its mouth at "Arpe".
The actual site of Santo Stefano knew the sweetness and the bitterness of the sea; the coast was craggy and tormenting, apart from the quiet inter­vals, made up of tiny, narrow, stoney beaches. The plane of Sestri did not exist, and nobody could have imagined it. The island was a real one, floating in front of the point, sharp, high and cold, like a ridge of Mandrella.
If human witnesses existed in this area, there must have been very few of them, and quite without cares; boars, wolves and bears were the only things around to draw their attention — and the rites to catch them more easily, and to defend themselves from them. Perhaps some tribes made  their camps somewhere along the curved ridge which winds, with its fortifications well-exposed and suitable for defence, from the sunny coast of Capenardo to Libiola, to San Pietro Frascati, to Vasca: and from there, down to Trigoso, and after, it joined land at Ginestra and at Castellaro delta Mandrella.
We know about the bad things said and done by these barbarians from the Romans, and the adjectives "harsh" and "hard" used to apostrophize them; in ancient times, they lived in the mountains running along the sea shore as far as Switzerland and France, where they combined their cultural and genetical characteristics with those of the Celts. 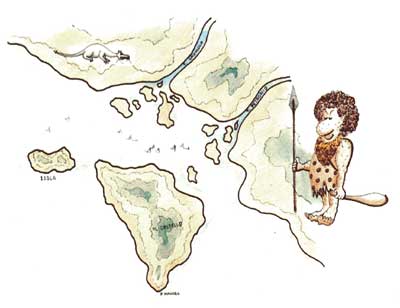 When, a couple of centuries before our time, the impatient and very efficient Romans arrived, things chaged again: the sea broke at the height of the medieval Ponte sul Gromolo, and the Gromolo, in the area where it flows together with the Rio Battana, probably branched out into two arms: one followed its present course, the other flowed down towards the PetroTi/o, which ran, more or less, along the present ViaAurelia, and entered the sea at about where the FIT now stands.
From the cliffs of Sant'Anna —where certainly authentic traces are present — the Roman road led down into the valley (in those times) or perhaps followed half-way along the coast to the Vasca. The only thing one knows is that the road which today bears fraudulent signposts, although well-meaning, calling it "Antica Romana", and which runs from the plane of Sant'Anna to Lapide (at that time swimming with frogs and "saraghi" — fish typical of the zone) only bears witness to a confused historical memory which only goes back to the end of the 1500s.
However, Roman reminders are not lacking: Sestri was diligently marked by portolans and guide books of the period, even if it is still not clear to which localities one must link the names of Segesta, Tegulata, etc. 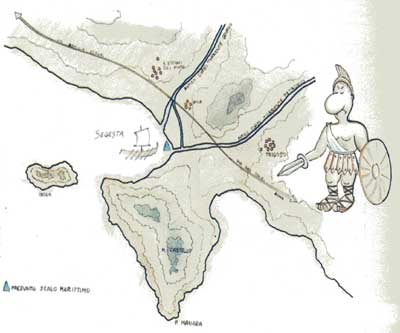 Towards the 1200s, the island was inhabited and fortified, and the "carruggio" marked out: from the "Gran Via ' to the Town Hall of Sestri was an exciting reality.
At the two headlands of this axis, the sea still broke: the gulf pushed itself beyond the Piazza delta Repubblica, where the streams Gromolo and Petronio flowed into the sea, united in a vast marsh.
The inhabitants of the island and of the mainland, which was a tongue of sand with some huts one against another, greeted each other by throwing stones and shouting across the narrow arm of the sea which still separated them. If there was really need to meet, they would visit by boat. During the first years of the 1300s, the inhabitants of the two banks of Sestri used to spend their days engrossed in anxiously watching, day by day. for the uni­que and unrepeatable moment when the mainland would reach and join it­self to the island in the middle of the sea.
When it happened, it was a simple and exaggeratedly natural event, even though it was extraordinary and moving. Only the more audacious or more nostalgic waves in love, succeeded, even at high tide, in uniting themselves across the strip of sand, a couple of metres wide, in which where they penetrated and died, leaving, a yellowish foam: to the people of Sestri, it seemed as if it had happened suddenly, like a miracle: there was a murmur, then a rumble: they ran towards each other across the new bridge of earth, on the fresh sand dune, splashed in the water which still soaked it, and in the waves which continued to accumulate at their feet, probably baffled and perplexed.
So, Sestri began to take shape — even if it changed every day, it changed, however, less quickly and less showily than in the past—and thepeopleof Sestri began to feel like "Sestresi".
Nobody who went to san Nicolo, for whatever reason, ever stopped, from the beginning of time, going up just a 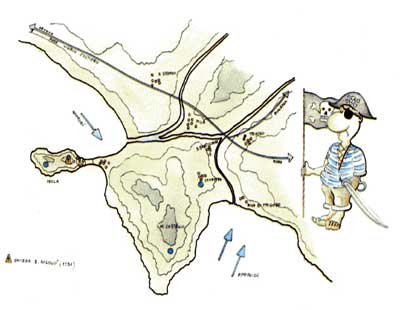 bit more, to reach the highest point of the cemetery: it was for this reason that they had built it in that position: from there, the living and the dead, or the living or the dead, could gaze— upon their land, which seemed beautiful and extraordinarily vast to them. Nobody had the idea that Sestri did not end a little way before the mouthes of the two streams which were beginning, almost before one's very eyes, to move the line of the coast: actually, it was almost a unanimous opinion that Sestri ednded at Vico del Bottone, and every day, the boys from the beach and those from the country, from Via della Chiusa, used to have bloody stonethrowing battles.

Trigoso had not been on the coast for a long time, but the inhabitants had difficulty in giving up considering themselves residents of a sea village. So, as soon as a strip of land was practicable under Monte Pagano, they called it Riva di Trigoso, and put up 4 houses with the intention of considering it a suburb.
Zenestra had the same idea, even if it had different reasons: a handful of rocks and sand were taken over under the cliffs, and a few dwellings were built: a small colony which was called Ripa di Zenestra, continually bea­ten by the wind and the sea.
On the narrow strip of sand bordering Monte Pagano, the people of Ripa and of Riva began to build boats, sew fishing nets and gave themelves to roving the sea. 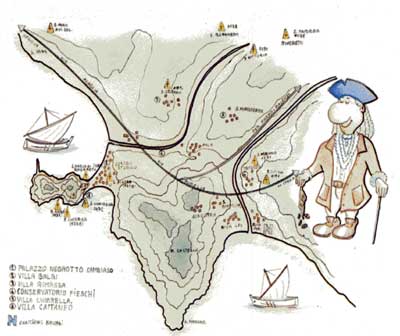 In thè 1800s, the beaches of Sestri and Riva were a show of "leudi" (typical Ligurianflshing boats) with their immense saiis ioosely outstretched in the sun and the rain...
The Sestresi and the Rivani were among the most courageous sailors.
Then the worid changed, too quickiy.
The small, extremely fast sailing ships, bulging like sows, and agile and indolent like cats, after crossing the Mediterranean from one cape to the other, carne to their inevitable death.
The oid men tried not to think about it...
But their sons...
They knew no bonds which couid not be broken. If they could earn a living in their father-land, ali well and good, otherwise they would go to build up their existence somewhere else.